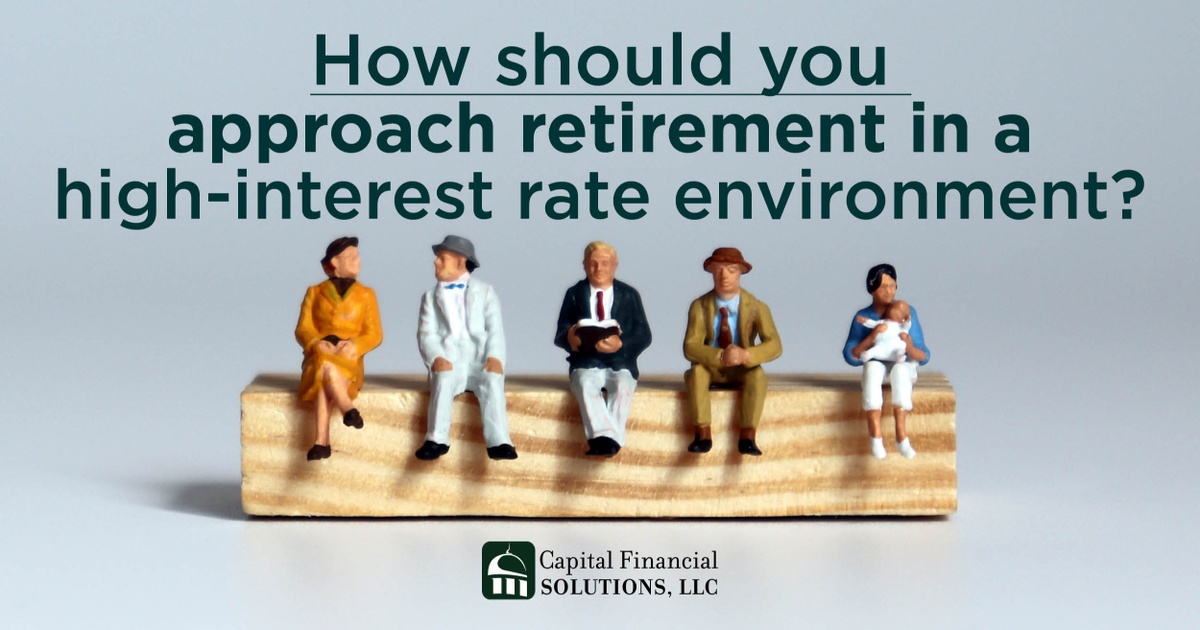 How should you approach retirement in a high-interest rate environment?

When interest rates rise, the bond market reacts — which makes this a good time to review your retirement position.

Investment advisors are looking at something that hasn’t happened in the last 24 years. For the first time since 2008, interest rates are palatable for investors. They’re increasing, which means the rate of return on newly issued bonds is increasing. And that means that if you, like many investors, have bonds as part of your long-term portfolio, it’s a good time to review all your options to get the best possible position for your retirement.

Average retirement ages are rising across the United States. Partially, it’s because people feel healthier to older ages than they did 50 or 100 years ago. But mostly, experts say, the primary factors are a lack of savings and reduced Social Security benefits. In other words, there’s not enough put away for a comfortable retirement.

The Center for Retirement Research at Boston College reports that in 1992, on average, American men retired at age 62 and women at age 59. In 2021, the average age for men rose to 65 and for women, to 62. That’s during the height of the pandemic, when many people decided to retire before they’d planned due to work shutdowns and concerns over their health — so the actual average retirement age might well increase significantly over the next few years.

Against that backdrop, it’s a good idea to make your retirement position as solid as you can make it even if you’re looking a decade or two in the future.

At the same time, the current rise in interest rates is thanks to the Fed taking steps against the growing threat of inflation, a situation that brings up the “R-word”: a possibility of a recession. With the bond market especially, the time to lock things in place is before that happens, if it happens.

The thing to remember with bonds is that they offer two kinds of returns. The first is the value of the bond itself — the price it can fetch today compared with how much it was bought for originally. The second is interest payment income, sometimes called the “coupon,” paid on a regular basis, either quarterly, semi-annually, or annually.

Rising interest rates mean this dividend will increase in value … for newly issued bonds, at least. For existing bonds, a rise in interest rates actually drives their overall value lower. As an example, a 30-year T-bond bought when interest rates are at 5% will regularly pay out a larger coupon over the next 30 years than the same T-bond bought 10 years ago, when (hypothetically) interest rates were more like 2%. The more “mature” bond will only pay a 2%  coupon dividend, and that only for the next 20 years, when it reaches maturity.

It’s like a see-saw. As interest rates rise, the value of existing bonds goes down. When rates fall, the value tends to increase.

Depending on the yield curve, some use bond laddering as a strategy in order to turn that see-saw into a ladder. Instead of locking in to one set of bonds feeling the same pressures at the same time, a “laddering” approach relies on maintaining a collection of bonds with many different maturity levels.

Consider each maturity date as one rung on a ladder. Bonds with the shortest time until maturity are the lower rungs. As each one matures and you receive the face value back, you can either keep the cash or, if interest rates seem higher, re-invest it in bonds with longer maturity dates.

As those dates get closer, those bonds move to the bottom of the ladder. As each one matures, a new chance rises to take one more step on the ladder. The more rungs you have, the more opportunities there are to either withdraw cash or move funds to a different investment if that seems prudent.

One of the traditional pieces of financial advice is called “The 4% Rule.” It refers to withdrawing 4% of your retirement savings in the first year of retirement, then increasing the amount each year by the rate of inflation — of course, with some adjustments and fine-tuning based on your situation and general patterns of movement in the market.

One of the advantages of the laddering strategy is that it makes the 4% rule easier to apply to your specific situation. The regular check-ups for fine-tuning based on your current needs can take place naturally, whenever it’s time to move up another rung.

It’s not a set-it-and-forget-it strategy, but it’s the next best thing. As always, regularly consulting an advisor is the best way to make sure you’re keeping up with the changes in your investment needs and with the world at large.

Talk with us for a review of how you are positioned for retirement.